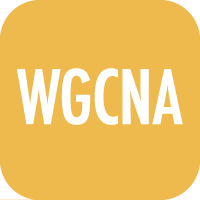 Weighted Gene Co-expression Network Analysis (WGCNA) is an algorithmic approach in systems biology to describe the correlation patterns among genes based on large, high-dimensional datasets obtained from RNA-seq or microarray experiments. It clusters similarly correlated genes into groups called modules, which could be further analyzed using functional information such as GO, KEGG, etc. Instead of relating thousands of genes to a sample trait, it tries to capture the relationship between typically a dozen modules and the sample trait.