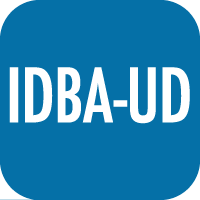 This is a KBase wrapper for the IDBA short read assembler.

IDBA-UD is an iterative graph-based assembler for single-cell and standard metagenomic short reads. IDBA-UD is an extension of IDBA algorithm and is good for data of highly uneven sequencing depth. In its assembly process, IDBA-UD iterates from a small k to a large k. In each iteration, short and low-depth contigs are removed using depth-relative cutoff thresholds, from low to high, to reduce the errors in low-depth and high-depth regions. This iterative approach compensates for the information loss with de Bruijn graphs constructed using a single kmer length. The reads are assembled locally to generate some missing k-mers in low-depth regions. For this reason, IDBA-UD is considered one of the more accurate microbial assemblers. IDBA-UD takes paired-end reads as input and generates an Assembly object as output.