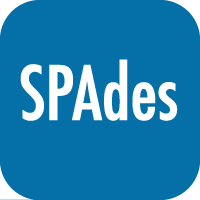 The Assemble Reads with SPAdes App allows the user to assemble a genome from reads using the SPAdes 3.15.3 assembler, which is designed for small genomes and single cell sequencing.

SPAdes is a de Bruijn graph-based assembler, which is noteworthy for its approach in applying multiple de Bruijn graphs (each built with different k-mer sizes) to better handle the large variations in coverage across the genome that are a characteristic of single cell sequencing, as well as a novel method for handling paired end information [1]. It begins its assembly process by using multisized de Bruijn graphs for constructing the assembly graph while detecting and removing chimeric reads. Next, distances between the k-mers are estimated for mapping the edges of the assembly graph. Afterwards, a paired assembly graph is constructed and SPAdes outputs a set of contiguous DNA sequences (contigs).

The App only takes paired-end reads library as input; using a single-end library will result in an error. The user sets one basic parameter for the input DNA type: standard for isolate DNA, single cell for flow-sorted bacterial cells from multiple displacement amplification (MDA), or plasmid for plasmid DNA. After setting the input and DNA type parameter, the user then provides a name for the output assembly.

Additionally, there are three advanced input parameters: (i) minimum contig length to report (default 500), (ii) a list of k-mer sizes for the de Bruijn graphs, (iii) assembly only, which prevents any error correction. By default, SPAdes has its own methods for choosing which k-mer sizes to use, depending on the input sequence data type. The user can override automatic k-mer value selection by using the second advanced input parameter. Read more information about manually selecting k-mer values in the SPAdes user manual.

Upon successful completion, the App creates a KBase Assembly object, which will appear in the data pane. A QUAST quality assessment report and summary are also generated.

For metagenome assembly, please use the Assemble Reads with metaSPAdes App.