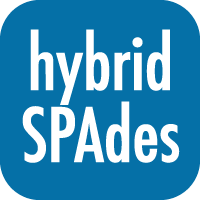 This is a KBase wrapper for HYBRIDSPADES: an algorithm for hybrid assembly of short and long reads. This program constructs the assembly graph from short reads using SPAdes, then maps long reads to that assembly graph, using the consensus to close any gaps[2].

SPAdes St. Petersburg genome assembler is an assembly toolkit containing various assembly pipelines. This manual will help you to install and run SPAdes. SPAdes version 3.15.3 was released under GPLv2 on July 22, 2021.

More information regarding the intricacies of HybridSPAdes can be found in the publications at the bottom of this App detail page.