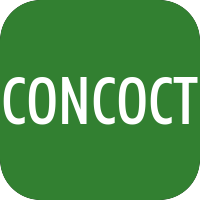 CONCOCT clusters metagenomic contigs into different "bins", each of which should correspond to a putative genome.

CONCOCT uses nucleotide composition information and source strain abundance (measured by depth-of-coverage by aligning the reads to the contigs) to perform binning.

CONCOCT takes a metagenome assembly and the reads that produced the assembly and organizes the contigs into putative genomes, called "bins". CONCOCT uses nucleotide composition information and depth of coverage information to perform binning.

Read Library Object: The read libraries are aligned to the assembly using a selected read mapper, and provide the abundance information for each contig that roughly follows the species abundance.

Minimum Contig Length: Contigs that are too short may slow down analysis and not give statistically meaningful nucleotide composition profiles. A value of 2500 bp is a reasonable cutoff, but as low as 1000 bp can be used.

Contig Split Size: Contigs are split before clustering to minimize the bias imposed by very large contigs. A value of 5000-10000 bp is a reasonable cutoff.

Contig Split Overlap: Contigs split before clustering can have varying degrees of overlap. A value of 0 is most often used.

Kmer Length: Size of the kmers used during profiling. A default value of 4 is reasonable to start with. Note: adjusting the kmer length will impact speed.

Downloadable files: The enitre output of the CONCOCT run may be downloaded as a zip file. This zip file also contains a table of read-depth coverage per contig ("*.depth.txt")

Implemented for KBase by Sean Jungbluth(sjungbluth@lbl.gov)