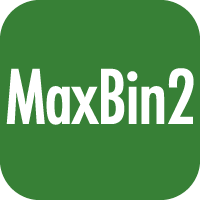 MaxBin2 clusters metagenomic contigs (assembled contiguous genome fragments) into different "bins", each of which corresponds to a putative population genome. It uses nucleotide composition information, source strain abundance (measured by depth-of-coverage by aligning the reads to the contigs), and phylogenetic marker genes to perform binning through an Expectation-Maximization (EM) algorithm.

MaxBin2 takes a metagenome assembly and the read sequence data that produced the assembly and produces groupings of the contigs that correspond to putative genomes, called "bins". MaxBin is software for binning assembled metagenomic sequences based on an Expectation-Maximization algorithm. Users can understand the underlying bins (genomes) of the microbes in their metagenomes by simply providing assembled metagenomic sequences and the reads coverage information or sequencing reads. For convenience, MaxBin will report genome-related statistics, including estimated completeness, GC content, and genome size in the binning summary page.