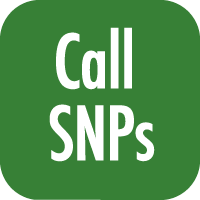 This method uses BCFtools [1] to call SNPs in a reference assembly. It will first map short reads to this assembly using the "map reads to a reference sequence" app.

This raw file is then filtered and variant data are output to the filtered VCF: bcftools filter -s LowQual -e 'DP>MAX_DEPTH || DP

This method also displays a figure showing the distribution of genotypes/strains across reads libraries, assuming each reads library represents a single metagenome sample. In each sample, a major genotype/strain is defined as concatenated major alleles where DNA polymorphisms were detected. The left panel of the heatmap lists the reference alleles. The right panel lists the position/locus of a DNA polymorphism on the reference genome. A disagreement with the reference allele is highlighted corresponding to the mutation types (transitions to transversions), and an agreement is colored in grey. The figure may be downloaded from the report.

This method should create a Variants object to store the result. However, because this object type is not yet available in KBase, this method creates a report on the SNPs instead. The BAM file and filtered VCF file can be downloaded from the report.

Team members who deployed this App in KBase: John-Marc Chandonia. For questions, please contact us.