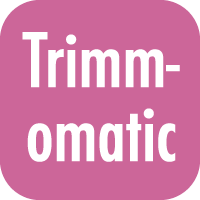 Trimmomatic version: 0.36 binary, source, and manual. Trimmomatic performs a variety of useful quality control tasks for Illumina paired-end and single-end reads. These tasks are performed as a series of steps. At least one step must be specified, and steps are run in the following order.

This step will remove Illumina adapters from the reads. You need to select one of the predefined adapter sets and set parameters for match criteria. Suggested adapter sequences are provided for TruSeq2 (as used in GAII machines) and TruSeq3 (as used by HiSeq and MiSeq machines), for both single-end and paired-end mode. You can find more information on the adapters in the Trimmomatic manual. If your reads were sequenced on other platforms, you may consider using Cutadapt - v1.18 to manually specify the adapters to remove.

Removes bases, regardless of their quality, from the end of the read, so that the read has the specified length. Steps performed after Crop might further shorten the read.

Removes the specified number of bases, regardless of quality, from the beginning of the read.

Remove low quality bases from the beginning, i.e. bases with a quality score below this threshold.

Remove low quality bases from the end. As long as a base has a quality score below this threshold, the base is removed and the next base is investigated. This approach can be used for removing the special Illumina 'low quality segment' regions (which have a quality score of 2), but we recommend Sliding window for that.

Performs sliding window trimming once the average quality within the window falls below specified threshold. By considering multiple bases, a single poor quality base will not cause the removal of high quality data later in the read.

This removes reads that fall below the specified minimum length. Reads removed by this step are included in the 'dropped reads' count.

This App creates a new reads library or library set object(s), with the name given by the user. In the case of paired-end reads libraries, separate forward and reverse single end objects are created. All created objects are reported in a table.