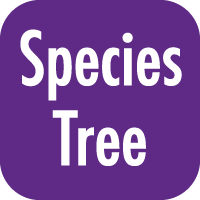 Add one or more Genomes to a KBase SpeciesTree.

This App allows a user to construct a species tree using a set of 49 core, universal genes defined by COG (Clusters of Orthologous Groups) gene families. It combines the genome(s) provided by the user with a set of closely related genomes selected from the public KBase genomes import of RefSeq.Since the number of genomes available in KBase is very large, the procedure starts by selecting a subset of public KBase genomes closely related to the user-provided genomes. Relatedness is determined by alignment similarity to a select subset of 49 COG domains. Next, the user genome(s) are inserted into our curated multiple sequence alignment (MSA) for each COG family. The curated alignments have been trimmed using GBLOCKS to remove poorly aligned sections of the MSA. Then, the MSAs are concatenated, and a phylogenetic tree is reconstructed using , (version 2.1.10, a method to quickly estimate approximate maximum likelihood phylogeny, see Publications) with the genome(s) provided by the user and the set of genomes identified as similar in the previous step. FastTree2 is used with the -fastest setting.

The Neighbor public genome count parameter will control how many nearby genomes are included in the species tree for each input genome. The maximum number of nearby genomes is 200. This represents the total number of close genomes that will be added to the tree. If you have several diverse input genomes, you should increase this number.

The primary output of this object will be a species tree data object. The App report will show the resulting tree and contain links for downloading the tree in newick format and as a pdf or png. Tree leaves are labeled by the NCBI RefSeq species name plus their GCF identifiers. User genomes are labeled with the data object name. Branch support values are shown for each node, as described in the FastTree2 documentation.

This App also creates a Genome Set object containing all the genomes in the species tree that was generated. You must provide a name for this output object. By default, the genomes in this Genome Set are not copied into your narrative, in order to make further analyses (e.g., viewing, finding domains) more convenient, you may select the Copy public genomes to your workspace option. However, this is not recommended if you set a large value for the Neighbor public genome count.

By clicking on the Genome Set object that is generated, you can edit the set of genomes, (e.g., to exclude some of them from downstream analyses).

The COGs domains used in the estimate of relatedness include: